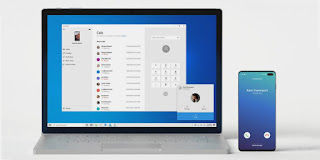 Microsoft has officially announced the update of the Windows service "Your Phone", with which users will be able to run mobile applications on the PC screen. The function works when a smartphone is connected and allows you to open programs in separate windows. They can be controlled using the mouse and keyboard.

So far, you can run only one application at a time, but with the next update, multitasking will also appear. You can pin your favorite programs from your smartphone to the taskbar or to the Start menu. Notifications will be available in a special section of the "Your Phone" application.

For now, this feature is only available on the Galaxy Note20 and only to Windows Insider subscribers in the Dev, Beta or Release Preview channels. In the future, the developers plan to expand the number of supported devices.
Facebook Twitter