Admin
Saturday, August 8, 2020
Facebook Twitter
Windows 10 is a good system, and it has deservedly gained popularity. But some of its capabilities were previously implemented in Linux, and Microsoft adopted them. Here are 5 striking examples. 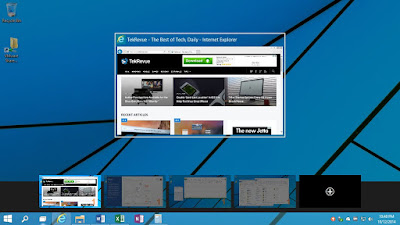 Windows 10 introduces the ability to create virtual desktops. This is a very convenient way to work with a large number of windows without buying additional monitors.

But virtual desktops are not a Microsoft invention. Previously, they already existed in macOS, and before that in Linux.

And in modern Linux shells, virtual spaces have much more flexible settings than in Windows 10.

This is a very handy feature found in many Linux graphical environments. You move the mouse to one of the corners of the screen, and a certain action occurs the window is minimized or maximized, the program opens, the screen saver turns on, and so on. This is really convenient.

But in Windows 10 there is only one active corner the lower right corner, it minimizes open windows and cannot do anything else. And in order to use it, you need an extra mouse click.

Windows 10 has a Task Viewer feature. Click on the button on the taskbar, and you will see thumbnails of the windows of all applications you have open.

This feature has long been implemented in Linux, and looks much more attractive there.

For example, in GNOME 3, to see all running programs, you need to press the Win key, aka Super.

Windows 10 Universal Apps connect to and work with your Internet accounts in the background. It is very convenient you enter your username and password in the settings, and you can no longer open Gmail in your browser. Letters will appear in Mail, events in Calendar, contacts in the People app.

Moreover, while in Windows 10 you can only connect email providers, Linux allows you to connect to social networks, cloud storage, and photo storage services.

This feature is convenient and effective, and can be found right in the system settings.

Linux distributions are equipped with so-called stores or application managers that download programs from repositories network libraries. You don't need to search for official sites, manually download installers and deal with updates.

Just open the manager, enter the name of the program, click the install button and here's the latest version of the application in front of you. It will install and update automatically.

Windows 10 also has its own app store Microsoft Store. But it still has very few programs used every day.
Facebook Twitter