Are you crazy about video games? Has your computer become obsolete and only capable of running smoothly with older or simple Age of Empires games? If you are considering changing PC gaming and do not want to spend a lot of money, take note of the following tips to choose the best inexpensive gaming computer with which you can enjoy the latest games without problems. 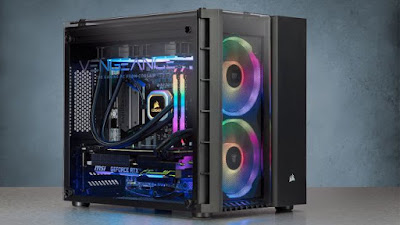 The first thing you have to think about is what kind of games you are going to play. A strategy game usually requires extra CPU performance, while a shooter needs a good quality graphics card for FPS. In this article we indicate the most important factors that you must take into account to choose your cheap gaming computer.

How to choose a graphics card for a gaming PC?

The graphics card is one of the most determining components of gaming computers. It represents about 1/3 of the total price of the computer. You should never skimp on your budget in this game. AMD and Nvidia are the only brands you should consider and are available at an acceptable price.

For us the most prestigious ranges are the Nvidia GTX, since they give a very good performance working with more current games. But you should bear in mind that it is better to opt for the dedicated 4 GB than for a smaller figure. The tendency is to always go to the most powerful one possible.

What processor am I going to need?

The processor determines the speed of the computer and its ability to run tasks smoothly. It is another of the most decisive components in your gaming PC along with the graphics card and also one of the most quickly obsolete as games increasingly demand higher performance. It represents 1/4 of the total budget of the computer.

There is great competition between AMD processors and Intel Core. It does not matter if it is Intel or AMD but at least it should have four cores to offer minimum performance. An Intel i5 processor is a good choice for most games. You can also consider the AMD Ryzen 7.

Currently the ones that are going to give more power to your games will be the Intel Core, but those that acquire more performance are the AMD, in addition to their prices being more competitive.

If you are looking for a computer that in addition to gaming is used for any other activity, such as video editing, doing professional work or opening many programs at the same time, we recommend AMD processors, since they have more multitasking power. Otherwise, if you are looking for maximum power for a game we suggest Intel.

How much RAM does my games require?

Forget about gaming computers that have less than 8 GB of RAM. Generally, most games require that number. Although some more recent ones already require 16 GB. In summary, if the budget is tight, mounting 8 GB is a good option and you will always have the possibility to expand it in the future.

It is also advisable to pay attention to the frequency at which it works. This data may appear next to the amount of RAM memory and is expressed in megahertz (MHz).

What type of storage is most recommended?

The ideal would be to have at least 1 TB of storage on the hard drive, since games have an increasingly large installation size (you can easily find video games that occupy around 100 GB on disk). So, if you add to this that you can have several games, in addition to the movies or series that you download from the Internet, including the programs, in a very short time you will have it at maximum capacity.

Cheaper gaming computers are typically mounted with an HDD, rather than an SSD. In this way, in addition to reducing the cost of the final invoice, the storage needs for the computer are covered since mounting an SSD of a moderate capacity would increase the budget.

Anyway, if you do not want to go over budget, you should consider at least a storage system that combines an SSD of about 240 GB (currently at a good price) to install the operating system and the game that you use the most in that moment, with an HDD to store your data.

It is not a great financial investment, and the performance of the computer is significantly improved. Especially with current hardware that harnesses the full potential of SSDs.

How to update my gaming PC?

Whatever your choice, it is essential to find a balance between the components. That all have a similar performance. It will be of little use to you a computer with a super powerful graphics card, if you then mount a processor that is not up to scratch or does not have a fast hard drive. So in the end you would be paying for hardware that you really were not going to be able to get the most out of.

We also recommend models that have the possibility of expanding over time. It is common to find desktop computers that have certain elements that cannot be replaced. That is, as much as you want, you will not be able to update them to adapt to the latest games.

In any case, they are very powerful machines that risk becoming obsolete soon due to advances in technology. With the pace of evolution of processors, graphics cards, hard drives and RAM, you will have to change one or two parts to keep your equipment updated. Or replace the entire team with a more powerful one. In this case, computer rental is a highly recommended option, since you have the equipment for a monthly fee and at the end of the contract you can replace it with a more modern one.

A good quality / price gaming device is the Lenovo Gaming Legion Y520, which incorporates, precisely, an independent graphics card NVIDIA GTX 1050 with 4 GB, an Intel i7 processor, 8 GB of RAM and 1 TB of space with optional hybrid storage to enjoy more speed. Its 15.6-inch screen doesn't make it too heavy if you choose to carry it in a backpack.
Facebook Twitter